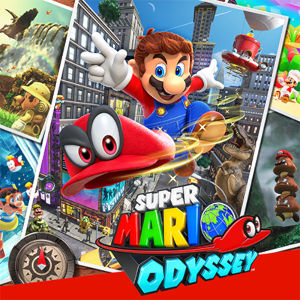 By Source, Fair use, Link

I'll cut right to the chase. If you can find a Nintendo Switch, you have got to play Super Mario Odyssey. Consoles are experiencing a slight resurgence in 3D platformers, with new Spyro, Crash Bandicoot, and Spongebob games which is so awesome. And Super Mario Odyssey is the best-of-the-best.

Odyssey's gameplay reminds me most of Banjo Kazooie. In Mario 64, Sunshine, and Galaxy, each level sort of has a "mission" to get a specific star. Once you get it, you're out. Mario 3D Land and World play more like 2D Mario games--you just try to get to the end of each level. But Mario Odyssey lets you stay in each level, exploring for "Power Moons". You don't leave after finding them. Controlling Mario is like you'd expect. The controls are great, and the camera control is better than ever before. I almost never noticed camera problems except when swimming as a fish in underwater caves.

Mario's new hat-throwing ability is such a cool part of the game. I thought it looked like a gimmick at first, but it is extremely well done. It is really cool controlling the different creatures. They all give Mario crazy/cool abilities. It is fun just throwing the hat at stuff and seeing what happens. The game is all about exploring, and using your hat to transform lets you reach new places and get to even more hidden places in each level.

Mario Odyssey is not entirely a 3D game. There are some 8-bit warp pipes that transport Mario into the old, 1985-style Super Mario Bros 2D mode. These sections are short, but really fun.

Levels can make-or-break a 3D platformer. Mario Odyssey's levels get an A+, they are all excellent. There are forests, deserts, beaches, Peach's Castle, a dinosaur land, and more. Most of the levels fit with the Mario-style, with cartoony graphics. But oddly enough, some of the levels have extremely realistic graphics. I am not sure why they have these levels. Mario sort-of seems out of place in them. Maybe it is just to show off the Switch console's processing power. Regardless of why, the realistic levels are super cool. I could spend hours exploring each one. They are each bursting with secrets.

The music is good. I don't normally care about Mario music (though Dire Dire Docks has great music), but I've been pretty annoyed by the "New Super Mario Bros" music. Thankfully, Mario Odyssey has good music.

Mario Odyssey is amazing, easily one of the best 3D Platformers of all time. 10/10. A must-play for anyone with a Switch.