I'm a big fan of aquariums (who isn't?) and love visiting them. But I'm always so annoyed with all the other idiots who also like the aquarium. People tapping the glass with their disgusting sticky fingers, disturbing the fish. Idiot kids running around with no parents in sight. And strollers everywhere, I hate strollers! Maybe I'm an "aquarium grinch", but rather than steal aquariums, I would like to have my own awesome aquarium someday. This is my grand plan if I ever strike it rich and build an aquarium.

The first thing my aquarium will have is electrified glass outside each tank. That means if an idiot touches the glass, they get zapped. Obviously not enough to kill them, but enough to teach them to never try it again. The fish will be happer and hopefully the glass-tappers will learn a lesson.

Aquariums are great for everyone, especially kids. The problem is "aggresive interactor" kids ruin it for everyone else. These are the kids running around, yelling, and having to touch everything. These are the kids that put their faces on the glass, and the kids that strike fear into the "touch tank" fish like in Finding Dory. My aquarium will filter these kids into an area full of dumb "hands-on" activities so they can wreak havoc there instead of with the people who want to peacefully enjoy the aquarium. I get the feeling that these "aggresive interactors" have a natural attraction to penguins, so half of the penguin exhibit will be available in this horrible "kid zone". Of course, the same penguins will be accessible for normal people.

If an aggressive interactor manages to escape the "kid zone" into the main aquarium, there will be colorful, "hands-on" signs enticing the kids and their families back into the "kid zone". And once you go through those doors, you won't be able to get back to the main aquarium through them. Unlike Willy Wonka's factory, my aquarium won't hurt these kids, it will just segragate them into areas away from the civilized people. And it will be fun enough in the "kid zone" that they don't know they are missing anything.

Absolutely no strollers allowed in the main aquarium. If you insist on bringing your dumb kid to the aquarium with a stroller, you are only allowed to be in the "kid zone" described above. Strollers are a menace to aquariums, and if your dumb kid isn't old enough to walk then he shouldn't be at the aquarium at all. I hope you stroller people like penguins and sticky "touch here" displays, because that's all you'll get at my aquarium. This rule doesn't apply to handicap-related strollers or wheelchairs.

I love it when aquariums are separated into themed areas, like an area for each ocean, or an area for jellyfish, or a "shark zone"...stuff like that. My aquarium will have tons of themed areas.

Dolphins and whales are a highlight for some people at an aquarium. I particularly like belugas myself. Maybe there will be a stadium area with a "splash zone" connected to the horrible "kid area" so those people can go get splashed by whales, but the main whales will be in their own area suited for learning about them. There will definitely be a "River Dolphin" sub-zone for river dolphins, which I have always been interested in. South America and Asia have dolphins that live in rivers! They are weird looking but it would be so cool to have a cool river dolphin habitat at my aquarium. Other whales I would hope to have: Belugas and narhwals. It isn't realistic to have huge whales at the actual aquarium. When I visited Iceland though, we went to the Whale Museum which was really cool and had life size whale models hanging from the ceiling. I would hope to recreate this in my aquarium, as it is so cool to be able to stand next to a whale and see how truly huge they really are. The most impressive whale in my opinion in Iceland's museum was the Sperm Whale. Though it didn't weigh as much as the giant Blue Whale, it was incredibly huge.

The deep ocean is so mysterious, and the fish so weird. I would love to have a dark deep-sea area with those crazy deep ocean fish swimming around at my aquarium. The area would be very dark and give you a feeling like you really were in the dark, deep ocean with the crazy fish.

I always love when you get to walk underneath tunnels at an aquarium. My aquarium would have a huge tunnel for each ocean, plus sub-ocean areas like the Gulf of Mexico. 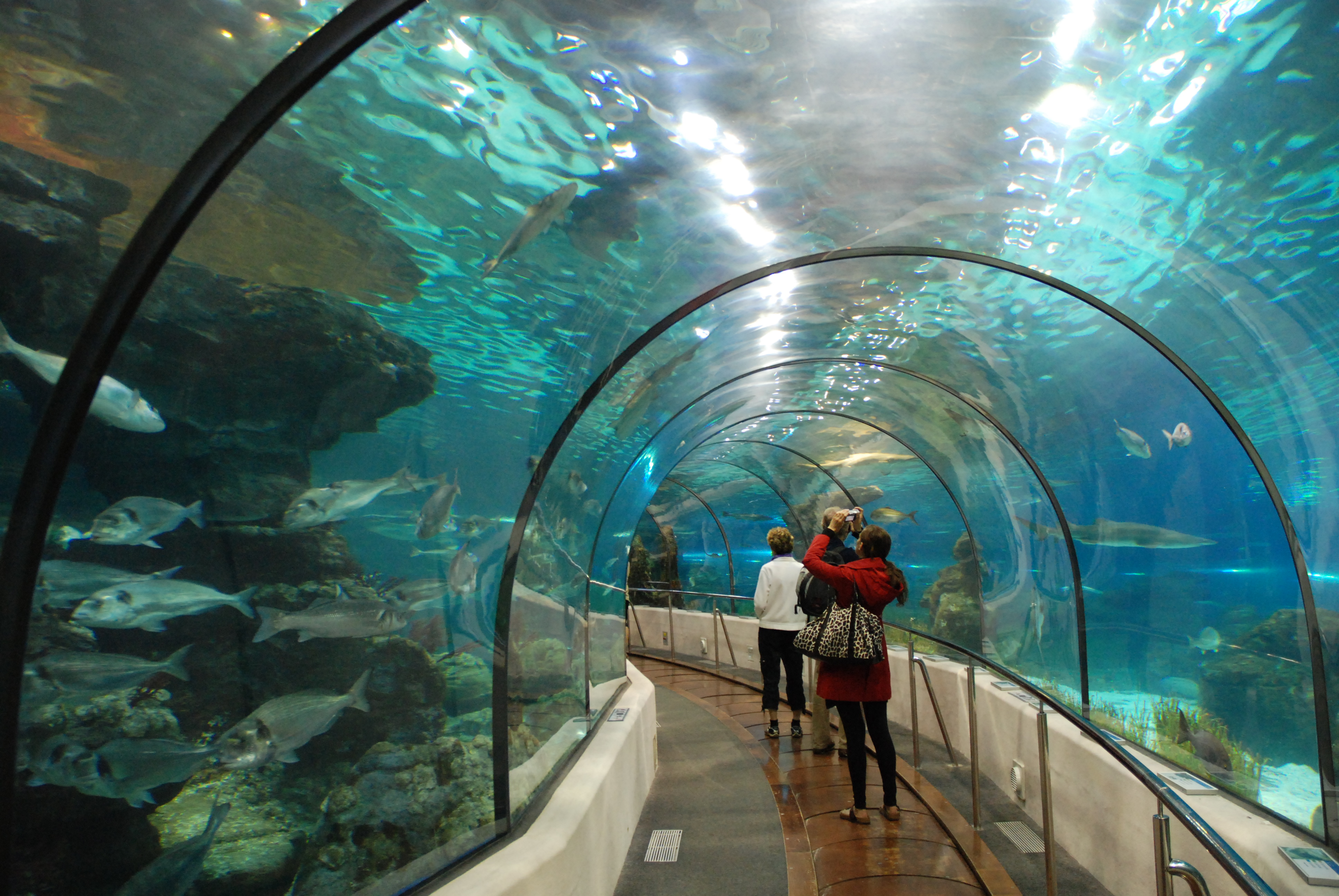 Some of my favorite water creatures are often ignored at aquariums--amphibians. I love learning about them as they turn from tadpoles into salamanders, newts, frogs, toads, and whatever else. My aquarium would have a huge pond section focusing on amphibians and each stage of their crazy lives. I would also like to have one of those underwater tunnels in the pond zone.

Another favorite water creature of mine are crocodilians. Of course, the best way to see them is described in my swamp review here. Normally alligator and crocodile areas at aquariums are a huge bummer. Sad looking animals just plopped in a small enclosure. Not at my ultimate aquarium. I plan on having REAL swamps for alligators, Nile and Saltwater crocodiles, and any others. You will be able to kayak your way through the alligator swamp. The crocs are too dangerous, so larger, croc-proof boats will be the way to see them in the croc-swamps. This swamp area will be massive, like a real swamp.

That's the plan for my aquarium.

Frog and gator pictures from https://www.publicdomainpictures.net